Single-family and Paired Villa Homes - starting from the mid $400s

Single-family homes from the high $300s

Multifamily and Single-Family Homes From the high $200s

Attached Villas and One- and Two-story, Single-Family Homes from the low $400s

Single Family homes with Everything Included from the $300s

Single-Family and Paired Villa Homes from the mid $400s

Homes to love. A lifestyle to adore. Single-Family Homes from the low $800's.

VENICE, Fla. (June 22, 2022) – Neal Communities is following up the success of its Avelina community in Wellen Park with the grand opening of Wysteria, a new neighborhood of 153 single-family and paired villa homes with a private amenity center in the Playmore District.

“Neal Communities has been a valuable, long-time homebuilding partner in Wellen Park, and we are pleased they continue introducing new neighborhoods and home products to our residential mix,” said Rick Severance, president of the Wellen Park. “Wysteria meets the pent-up demand from homebuyers looking for smaller homes and the low-maintenance lifestyle of attached villas.”

The paired two-bedroom, two-bath villas have 1,434 square feet and 1,524 square feet under air, covered lanais and an optional den per plan.

Homes in Wysteria are within walking distance of the centrally located neighborhood amenity, offering a pool and spa with three shade structures and a garden trellis, an open-air cabana with a gathering room and screened sitting area, as well as two pickleball courts.

“We are thrilled to open another beautiful neighborhood inside Wellen Park,” said Pat Neal, founder and chairman of Neal Communities. “Wysteria is a perfect place to call home inside an exciting and growing area of Sarasota County.”

Neal Communities will be hosting a virtual grand opening celebration at 12 p.m. on Thursday, June 23 on Facebook, Instagram and YouTube. During the virtual event, Neal Communities’ sales team will walk spectators through Wysteria’s model homes and give an overview of the community. Spectators will also learn more about Downtown Wellen. Register for the grand opening event in advance at on.nealcommunities.com/wysteria-go-event.

Sarasota-based Neal Communities is Southwest Florida’s largest and most established locally owned and operated private homebuilder. During the company’s 50-year history, it has built over 18,000 new homes in more than 90 communities from Tampa to Naples. The company consistently ranks among the nation’s top 100 homebuilders and has earned numerous awards including the prestigious Builder of the Year from Professional Builder in 2015 and America’s Best Builder in 2012 from BUILDER Magazine.

With the core belief “Where You Live Matters,” Neal Communities has donated over $7.5 million to local charities throughout Southwest Florida and is committed to the communities where they live, work and build.

Designed for connections to nature and community, Downtown Wellen also offers a hammock grove and a lounge area underneath a nearly century-old heritage oak tree, a fountain and splashpad, a nature-inspired playground, the waterfront Solis Hall events venue and the Great Lawn for community festivals, markets, celebrations, picnics and playtime.

Luxury rental apartments at Tropia and world-class independent, assisted living and memory care at Grand Living are also under construction. A boutique hotel is also planned for Downtown Wellen.

Wellen Park offers a mix of residential, commercial and recreational options. The community currently has approximately 9,500 residents, and at full build-out will have more than 50,000 residents and 22,500 homes within its three distinct districts: West Villages, Downtown Wellen and Playmore. 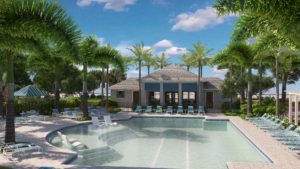 West Villages is now more amazing than ever. We’re proud to announce a new name and a new chapter for our vibrant community along Florida’s West Coast. Welcome to Wellen Park, where distinctive districts — including West Villages — offer new homes, shops, restaurants, amenities, and more.

CHECK OUT OUR FAQ

See for yourself how Wellen Park is even better than you ever imagined.

We will be in touch soon.

This website uses cookies to improve your experience while you navigate through the website. Out of these cookies, the cookies that are categorized as necessary are stored on your browser as they are essential for the working of basic functionalities of the website. We also use third-party cookies that help us analyze and understand how you use this website. These cookies will be stored in your browser only with your consent. You also have the option to opt-out of these cookies. But opting out of some of these cookies may have an effect on your browsing experience.
Necessary Always Enabled
Necessary cookies are absolutely essential for the website to function properly. This category only includes cookies that ensures basic functionalities and security features of the website. These cookies do not store any personal information.
Non-necessary
Any cookies that may not be particularly necessary for the website to function and is used specifically to collect user personal data via analytics, ads, other embedded contents are termed as non-necessary cookies. It is mandatory to procure user consent prior to running these cookies on your website.
SAVE & ACCEPT